Among them is the 4-star Hydro character that was previously released along with Cyno in Version 3.1, Candace. She is the guardian of Aaru Village and a descendant of King Deshret – a gentle and benevolent soul who only wants nothing but peace and good health bestowed upon her village, and will welcome anyone with open arms as long as rules are followed and boundaries are respected under her watch. Despite this kind-hearted nature, Candace will not hesitate drawing her lance and shield against anyone who dares to infiltrate Aaru Village with their illegal endeavors.

To start off, Candace’s kit and her role as a Support scales off HP. Talent priority should be her Elemental Burst, followed by her Elemental Skill, then you can completely ignore her Normal Attack unless you want to use her as a Main DPS (which is frankly not recommended at all).

Candace’s elemental skill, Sacred Rite: Heron’s Sanctum, comes with 2 Charge Levels and has a TAP and HOLD difference when used.

Whenever you TAP, Candace will rush forward with her shield, dealing Hydro DMG to opponents in front of her.

However, whenever you HOLD, Candace will raise her shield to block incoming attacks from nearby opponents, forming a barrier that absorbs DMG based on her Max HP, while absorbing Hydro DMG 250% more effectively.

To put it simply, her elemental skill is mainly used against tanky enemies and to counter their attacks, apply Hydro to them, and generate Energy Particles.

Candace’s elemental burst, Sacred Rite: Wagtail’s Tide, makes full use of her Support capabilities by performing the Prayer of the Crimson Crown.

Upon placement, Candace will deal AoE Hydro DMG against opponents based on her Max HP, as the Prayer of the Crimson Crown will immediately be taking effect.

This increases the Elemental DMG of team members’ normal attacks by 20% and unleashes a rippling wave attack on opponents whenever a character takes the field. Additionally, the attacks of characters who wield a Sword, Claymore, and Polearm will be infused with Hydro.

Candace’s passive talent, Aegis of Crossed Arrows, allows her to immediately charge and counter right after once she is hit by an attack during the HOLD duration of her Elemental Skill.

Candace’s passive talent, Celestial Dome of Sand, allows the party members affected by Prayer of the Crimson Crown to deal 0.05% additional DMG against opponents for every 1,000 points of her Max HP. This only happens whenever they deal Elemental DMG through their Normal Attacks.

The best pick for Candace’s weapon is none other than those with Energy Recharge as the main stat. As she’s meant to be a Support unit capable of buffing teammates, you might want to use her Elemental Burst as often as possible. 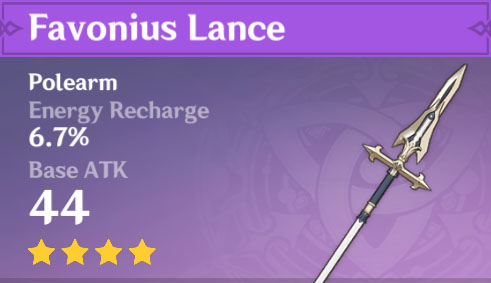 Favonius Lance is typically your go-to 4-star ER polearm. At Level 90, it offers a whopping 61.3% Energy Recharge, making it great for Candace’s Energy requirement because of her low Elemental Particle generation.

This weapon’s passive stat also gives 60% chance to generate 6 Energy for the wielder upon a CRIT hit, but that would require Candace to be on the field for such a condition to be met.

Since you may want to use her Elemental Skill due to its block and counter mechanic similar to Beidou’s parry, in this way, she will also be able to provide Energy for the team as well. 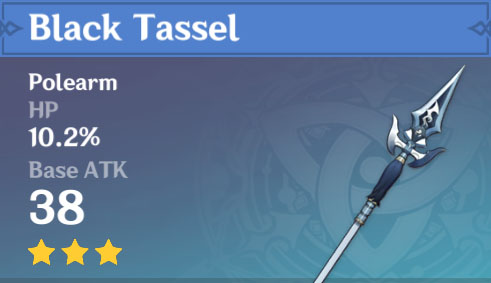 Black Tassel may only be a 3-star weapon, but this happens to be the only polearm with HP as the main stat and have seen the light of day even with a number of endgame players – what with Zhongli being built as a tanky shielder in a number of scenarios.

At Level 90, Black Tassel offers an additional 46.9% HP for the wielder, making it a viable option for Candace if you intend to stack her with as much HP as possible.

Candace is Aaru Village’s sole guardian who wields a lance and a shield. She is designed as a Support character capable of DMG absorption that can buff party members’ offensive attacks. Her role encourages you to use her Elemental Burst as often as possible.

Similarly to most Support units in the game whose Elemental Bursts are the focal points of their kits, Candace is no exemption from the usefulness of the 4-piece Noblesse Oblige.

Like how this artifact set has been long established to be the best fit for Support characters, the efficiency of Candace as one greatly benefits from this. For one, you’d want to be optimizing her the most through her Elemental Burst, granting party members the Prayer of the Crimson Crown effect, which buffs their offensive Elemental DMG for 12 seconds.

In that case, having the Noblesse Oblige equipped on Candace (assuming you don’t have anyone else using it in your team) and then switching immediately to your actual Main DPS, would amplify their overall DMG to greater lengths with its 4-piece effect – which increases all party members ATK by 20% for the next 12 seconds.

Although her Support capabilities are far from the likes of Bennett, nor Yunjin whom she shares the same niche with, she is still deemed as a viable unit.

Tenacity of the Millelith / Emblem of Severed Fate

As previously mentioned, her kit scales off HP so typically – the higher the HP it is, the better. Though that is more for the DPS and DMG absorption that Candace can quite possibly offer, so having an equally higher Energy Recharge is also one way to balance her Support capabilities by having her Elemental Burst up more often than not.

Candace’s first constellation extends the duration of her Elemental Burst from 9 seconds to 12 seconds.

As Sacred Rite: Wagtail’s Tide is mainly where her Support capabilities come from, this constellation is a pretty decent one.

Candace’s second constellation allows her to gain an additional 20% to her Max HP whenever her elemental skill hits opponents.

Candace’s fourth constellation only shortens the coolden of her Elemental Skill’s HOLD to be the same as that of her TAP.

Candace’s sixth constellation unleashes an attack wave that deals AoE Hydro DMG that’s equal to 15% of her Max HP whenever a party member that’s affected by Prayer of the Crimson Crown deals Elemental DMG through their Normal Attacks.

This doesn’t apply to Candace herself but teammates will be able to proc it instead. Such an effect can only be triggered once every 2.3 seconds and is considered Elemental Burst DMG.

That said, this particular constellation may be Candace’s best as this increases her off-field DPS for the active character and applies more Hydro on enemies.

At the moment, there are quite a number of teams that Candace would somehow fit into – but then again, it’s just a matter of preference and replacement scenarios. That said, it’s hard to tell that she can outshine the other well-established Support units in the game.

So far, here is an ideal Candace team where you can be comfortable as such in a team rotation:

Called “Ayato Hypercarry,” this team consists of Ayato acting as the Main DPS – while Candace, Kazuha, and Yun Jin are there to provide buffs for his overall DMG to escalate.

Ayato is one of the game’s many DPS units, but similarly to Yoimiya, his DMG comes from Normal Attacks that become infused with Hydro whenever you use his Elemental Skill.

This way, Candace and Yun Jin both share the same niche as Support units who can buff teammate’s Normal Attacks. However, while Candace prefers to buff the Elemental DMG of party members’ Normal Attacks, Yun Jin is better in this area because she can buff all types of Normal Attacks.

That said, Yun Jin’s best in slot artifact set appears to be the 4-piece Husk of Opulent Dreams, so the 4-piece Noblesse Oblige seems to belong to Candace in this scenario. As long as you’re equipped with knowledge on proper team rotations, Ayato’s potential as a Main DPS will truly soar given this set-up.

As for Kazuha, who’s long established himself as one, if not the best Support character in the game – can buff Ayato’s overall Hydro DMG through his Swirls, as well as being in charge with crowd control situations.

To sum it all up, Candace is far from a meta-changing unit, given the fact that the first ever Support characters released are still at the top of their game. Compared to them, Candace is a viable option to say the least, but what she does is so little to even be commended unless you have her C6 unlocked.

At the end of the day, it’s her kit being such a designated Support from the get-go as well as her suitability within a number of team comps that makes Candace a unit you can build whenever the need arises.