Among them is the first 4-star Dendro character that was released back in Version 3.0, a trainee Forest Ranger residing in Avidya Forest, Collei. She is an enthusiastic, young woman who was once a victim of Fatui experimentation as seen in the game’s official manga. Despite that, she remains positive and hardworking under the guidance of her master, Tighnari.

To start off, Collei’s kit and her role as a Sub DPS (who is more of a Dendro applicator than offensive DMG dealer) doesn’t really scale off anything, so she’s typically treated as such with either an ATK/Crit, Elemental Mastery, or Energy Recharge builds. That said, talent priorities should be both her Elemental Burst and Elemental Skill, and you can completely ignore her Normal Attack.

Collei’s elemental skill, Floral Brush, makes her throw a boomerang that deals Dendro DMG to opponents in its path. Briefly, it will return to her after a set time, and should deal another instance of Dendro DMG.

Collei’s elemental burst, Trump-Card Kitty, summons the doll named Cuilein-Anbar – causing an explosion that deals AoE Dendro DMG upon placement. Afterwards, a Cuilein-Anbar Zone will be created that should last for 6 seconds, whereby the doll will continue to bounce back and forth against enemies within the AoE, thus dealing Dendro DMG.

Collei’s passive talent, Floral Sidewinder, makes the most out of teams that focus on Dendro reactions by having Collei’s Floral Ring grant the Sprout effect to party members. After one of them triggers a Dendro-related elemental reaction before the Floral Ring returns, the Sprout effect will activate upon return, and continuously deal Dendro DMG that’s equivalent to Collei’s ATK to nearby opponents that should last for 3 seconds.

Collei’s passive talent, The Languid Wood, allows the Cuilein-Anbar Zone from her elemental burst to extend by 3 seconds, as long as your active character within the AoE triggers Dendro-related elemental reactions.

The best pick for Collei’s weapon is none other than those with Energy Recharge as the main stat. As she’s meant to be a Sub DPS that’s mostly there to apply Dendro and trigger Dendro-related reactions, you might want to use her Elemental Skill and Elemental Burst as often as possible. 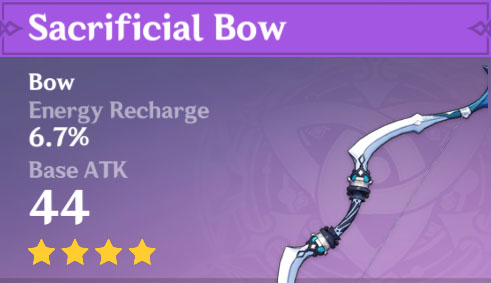 Sacrificial Bow might be the best 4-star bow of choice for Collei. At Level 90, it grants the wielder 30.6% Energy Recharge – a much needed increase mainly due to her long Elemental Skill cooldown.

This weapon’s passive stat also allows the Floral Brush to have a 40% chance of ending its own cooldown, which means there’s a possibility you’ll be able to use her Elemental Skill twice. This way, Sacrificial Bow’s CD reset can proc on the Floral Brush’s outgoing and returning hits, and still manage to activate the Sprout effect as long as Collei is on-field. 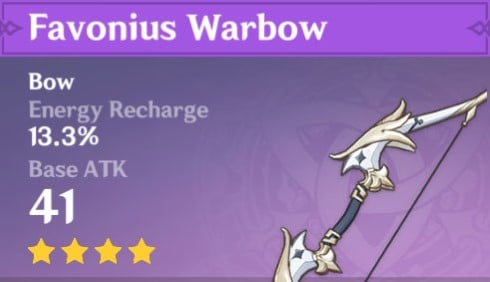 Moreover, another option would be the Favonius Warbow that offers a whopping 61.3% Energy Recharge at Level 90.

This weapon’s passive stat also gives 60% chance to generate 6 Energy for the wielder upon a CRIT hit, but that would require Collei to be on the field for such a condition to be met.

If your decision is to build her using the standard CRIT build like most Sub DPS units, then this weapon might help you the most – the amount of ER it grants the wielder is huge, and would compensate Collei’s unfavorable Energy problems, while covering up for the team’s overall Energy recovery as well. 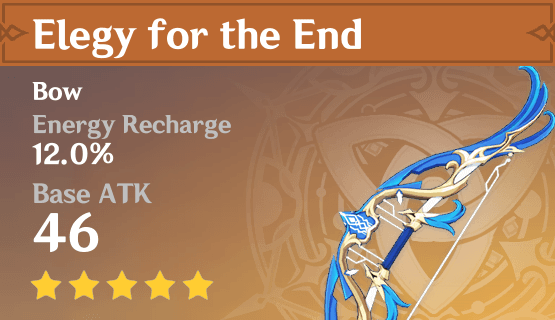 Elegy for the End has established itself to be a really good support weapon, especially fitting for the likes of Venti and Yelan.

Typically, for a Dendro Sub DPS unit such as Collei who you’d swap after using her skill or burst, this is your best bet. Not only does it provide 55.1% Energy Recharge at Level 90, but also increases the wielder’s Elemental Mastery by 60.

Furthermore, whenever she uses an elemental skill or burst and they manage to hit opponents, Collei will gain a Sigil of Remembrance that’s stackable to 4.

When 4 Sigils of Remembrance are in possession, all party members will receive an additional Elemental Mastery by 100 and their ATK will increase by 20% that will last for 20 seconds.

Since Collei would work most efficiently as a Sub DPS that’s mostly there to apply Dendro and trigger Dendro-related reactions, it would mean that she’s meant to use an artifact set similarly to a Support unit.

Deepwood Memories takes the cake as Collei’s best artifact set – with the 2-piece that offers an additional 15% to her Dendro DMG, and the 4-piece set which decreases the opponents’ Dendro RES by 30% for 8 seconds upon the use of an elemental skill or burst.

Overall, it boosts Collei’s Dendro DMG both in raw and those that are fused with another element. This way, she can also aid the team’s Dendro DMG through the 30% RES shred.

Though you have to bear in mind that it’s highly advisable there should only be one equipper of this artifact set to avoid redundancy. Fortunately, it’s effective and can be used by a Dendro DPS, Sub DPS, and Support.

With Collei’s Elemental Skill and Elemental Burst both being equally important, the most likely scenario in a team rotation would be to swap her after using either one of them.

Similarly, while Deepwood Memories boosts the overall Dendro DMG, the 4-piece Noblesse Oblige is definitely the universal Support set that’s mainly equipped to units whose Elemental Bursts are the focal points of their kit.

Collei fits the criteria as a unit whose Elemental Burst applies and deals AoE Dendro DMG. Therefore, swapping to your Main DPS must be the next move, amplifying their DMG to greater lengths with its 4-piece set effect – which increases all party members ATK by 20% for the next 12 seconds.

Collei’s first constellation gives her an additional 20% Energy Recharge as long as she’s present in the party, even if not on-field.

Collei’s second constellation changes the Floral Sidewinder passive talent – upon the use of her elemental skill, the Sprout effect will be granted to the character after its return, dealing 40% of Collei’s ATK as Dendro DMG to nearby opponents that should last for 3 seconds.

Which means, unlike the initial passive talent which requires you to trigger Dendro-related reactions for Sprout effect to activate, at C2 you just have to wait for it to return.

Additionally, if the duration within Collei’s Floral Brush up until a particular Sprout effect ends, if any of the party members trigger a Dendro-related elemental reaction, the Sprout effect will be extended by another 3 seconds.

This way, only one instance of Sprout effect will be extended.

Collei’s fourth constellation gives an increase to all party members’ Elemental Mastery by 60 after using her elemental burst, which should last for 12 seconds.

Although Collei is very F2P friendly, she only appears to be most efficient in Quicken teams.

So far, here is an ideal Collei team where you can be comfortable as such in a team rotation:

Ideally, if you have Tighnari in your roster, he should be the Main DPS in this scenario. To fully understand how his kit works, we have a full in-depth guide for this character which you can go check out over here.

Furthermore, here comes Collei acting as a Sub DPS, boosting Tighnari’s overall DMG as long as she’s equipped with the 4-piece Deepwood Memories artifact set. She can also deal Dendro DMG on her own as well, while making sure that the element is always applied to opponents.

While Fischl who is also a Sub DPS can deal massive amounts of Electro DMG, generate energy particles at a frequent speed (as long as paired with a fellow Electro character), and her passive talent allows Oz to deal Electro DMG equal to 80% of her ATK whenever Electro-related reactions are triggered.

As for Kuki Shinobu, along with Fischl they both are going to act as Electro applicators to fuse with Tighnari and Collei’s Dendro, thus rendering the Quicken status. When this happens, the Quicken status should stay active on enemies for as long as possible, helping Tighnari trigger Spread reactions and deal massive amounts of DMG himself.

Apart from Fischl being a Sub DPS who can trigger Aggravate reactions herself, Shinobu will be the ones to provide continuous healing for the party’s survivability.

To sum it all up, Collei is far from a meta-changing unit, nor is she a strong Dendro character that can stand on her own and still be viable. Truthfully, the Dendro Traveler is better than her in terms of usefulness for your party’s overall performance.

At the end of the day, as we wait for the arrival of future Dendro characters and it just so happens that Dendro-reactions focused teams are to your liking, you can continue using Collei.